We’ve optimized the Google My Business profiles of the two company branches and increased Google Search views by 56% and 255%. We’ve achieved an increase in the number of calls, site visits, and photos views.

The Google statistic after SEO-optimization

1. Optimization of the company name — added a search query.

2. The main business category was changed. We also added a feature to follow the link to the registration form.

3. We added the additional categories, which informatively describe the company and its’ products and services.

4. In the ‘Services’ tab, we specified all the company’s types of works and their cost.

7. The company’s favicon was updated. 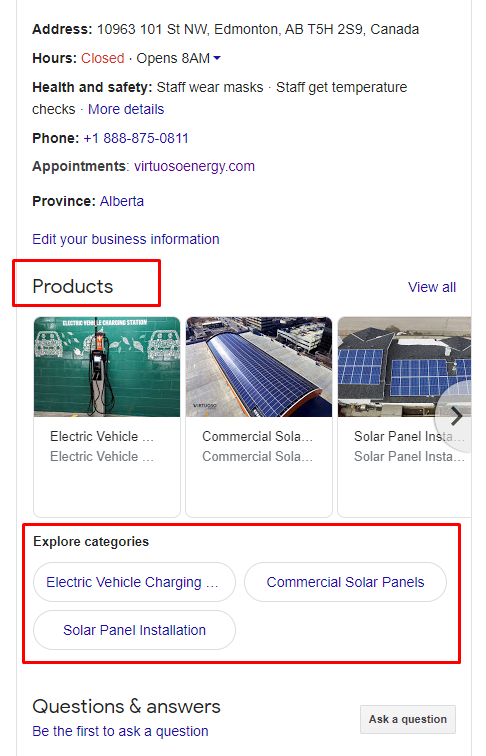 9. We fixed all the issues with working hours.

10. We’ve published posts with general info about the company, promotions, and current news.

11. Made recommendations for maintaining the GMD profile.
12. Developed instructions for working with reviews. Considered the issues:

2 Results. Statistic of the company branch in Calgary, Canada

In January, the number of direct searchers of the company increased by 107%, and discovery searchers by 77%. The metrics continued to grow in February.

In January, clients visited the website more often. Website visits increased by 28%. The number of calls increased twice. It was more than in the previous period. Photo views increased by 43%. The metrics continued to grow in February.

The branch has better metrics by the Photo Views, compared with the competitors

3 The branch in Edmonton, Canada

The company increased its views in Google Search by more than 253%, from 1050 to 2660 views. The growth on the Google Map was 58%. The metrics continued to grow in February.

In January, website visits increased by 206%. Photo views increased by 148%. The activity became even higher in February: clients began to visit the site more often, call, and view photos.

The blue line is the client’s data; the red line is competitor metrics. As we can see on the screenshots, the numbers of the views were equal to the average.

The cooperation with the Canadian company confirmed that GMB account optimization is essential in local SEO promotion. Working with profiles can bring a significant increase in traffic to the site.